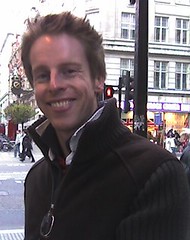 Stumbling through London the other day after a long session at the Powerbook, I realised I just had to turn into a pub for a pint. Put it down to the call of nature. Incredibly, but who should happen by but Peter Nixey of Webkitchen. We got chatting over a jar, as you do, and he mentioned a new Web 2.0 project he was working on.

Now, before you scream “We hate Web 2.0”, just listen. His idea was to create a site which uses “no server-logic and stores no data of its own.” Very Web 2.0, I said.

The result is Eventsites, a true mashup of Google Maps, Flickr and a calendar API. This means anyone can create a web site for an event, with a map to the event and associated photos. All very easy and simple.

Now, I know you are going to say – that’s been done before. But the point is, it’s not been done in this way very often before, and the interesting thing about it, is that it took just one young guy who lives in South West London to do it.

Peter Nixey has a longer explanation on his blog about how and why he did it, but I just want to say that this kind of thing is, to me, what Web 2.0 is all about, both in culture and implementation.

Regarding the latter, if you read Dion Hinchcliffe’s quite interesting definition of Web 2.0, Nixey’s site fulfills pretty much all of the criteria. To quote:

Regarding the former – culture. What I mean by that is that Web 2.0 represents the rise of very small teams, capable of implementing useful things very quickly and developing them in a continuous manner in concert with user participation. In this case the ‘team’ is just one guy. That’s why the Web 2.0 movement has so much potential power I think.