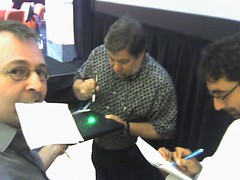 We were interviewing Steve Wozniak (the original co-founder of Apple with Steve Jobs, who actually built the first Apple machines) after his speech at the AlwaysOn conference. Being a Mac fan and user of old I asked him to sign my Macbook. He tried a ballpoint which didn’t work. The next thing I knew he’d whipped out what appeared to be a portable laser (it was damn bright to look at) and proceeded to attempt to etch his name into the plastic. I half thought I’d end up with a huge, smouldering hole in my Mac. But after a few seconds he said, with a shrug, “No, I don’t see any smoke rising,” and gave up. But at least I got the photo… (P.S. I’m now in Los Angeles and will write up the conference later)