At some point there’ll be a more detailed report on my findings in Scandinavia, but for now, here’s a smattering of some of the people I’ve been talking to and the information I’ve gathered on the ground in Stockholm, Helsinki and Tallin (Estonia).

My ‘Scandinavian Odyssey’ began with a dry sandwich aboard a British Airways flight From London into Stockholm’s super-futuristic Arlanda airport. Sitting next to me were a Swedish couple who’d been celebrating “his” 40th birthday. They looked like pretty dull people, rather plainly dressed, at least up until the point when they ordered a couple of whiskies and a half bottle of wine each to quaff on the trip.

A flight delay meant arriving in Stockholm in the dark. But my taxi pulled me up right outside the Non Solo bar cafe where I met A-List Swedish blogger Henrik Torstensson (below) of Torstensson.com. 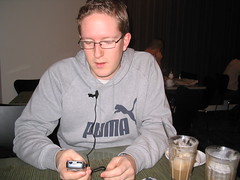 Henrik turned out to be an affable young man in his mid 20s with an encyclopedic knowledge of the Swedish technology and internet business. Later I was to hear from other sources that he was probably the most well connected blogger in the sector.

Getting a heads-up on the scene here is deceptive. In some respects its very similar to the UK. People are all using mobile and sites, as you’d expect in any educated, developed western economy. But things we take for granted, like the ubiquity of the iPod, are less obvious. So, for instance, “Jens of Sweden” was a guy who brought out MP3 players before the iPod was even around – hence the iPod does not have the stranglehold on the market as elsewhere (although it is gaining ground).

Also, online networking amongst teenagers is a full-blown phenomenon. Where they may be MSNing eachother after school in the UK, in Sweden they are doing that, plus asking their parents for a 10Krona sofa for their Habbo Hotel room, and building shrines to friends killed in the Boxing Day Tsunami over at LunarStorm.com. In fact the latter, which recently launched in the UK, is a massive succes story here. Some estimates say nine out of ten Swedish teenagers are registered on the site. I’d been told about this by the UK’s Andrew Gerrard over at D-Marketing in December, but until I came here I didn’t realise just how big it was.

Henrik also talked about how online publishers have done quite well here given that truly local content has to be produced in Swedish. Hence media mainstream players like the Aftonbladet newspaper have got into areas such as blogging quite early compared to, say, the Daily Telegraph. But altoutgh the classified advertising market is doing well online, it’s in the realm of online auctions where Swedish culture is really changing… (see Part 2 for more, out soon)…